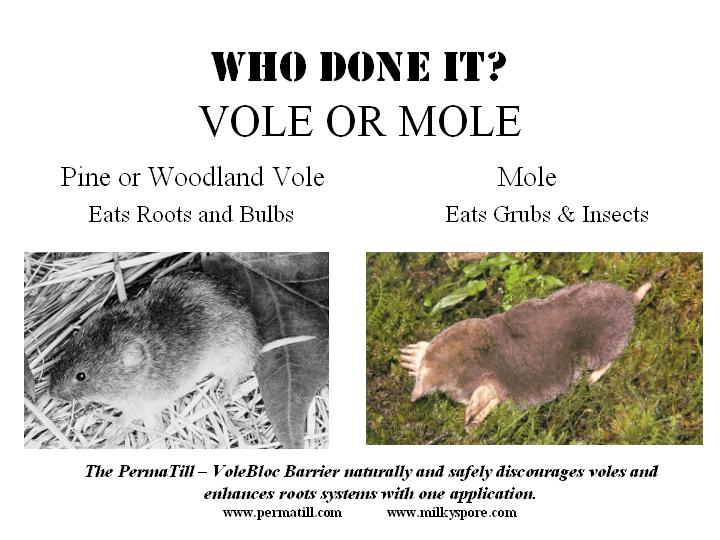 Are your plants leaning or falling over because roots are being gnawed? Or are they mysteriously disappearing? If so, you may have voles. The pine vole, (Microtus pinetorum) is becoming a bigger problem in the home landscape as increased development reduces their natural habitat and they become more adapted to our backyard.

Pine voles are reddish brown and small, about two to four inches long, with a short tail, blunt face, and tiny eyes and ears. Pine voles feed mainly on roots and tubers of plants. They spend much of their time under leaf litter or in underground burrows or tunnels no deeper than a foot. They don’t hibernate and even though we rarely see them they are active day and night. Their lifespan averages anywhere from two to sixteen months. A pair of voles can have up to six litters a year averaging two to four young per litter. Gestation period is about 21 days and female voles mature in 35 or 40 days and as nature will dictate, the cycle continues. Pine voles have monogamous mating systems and family units tend to maintain territories as small as 1000 square feet and remain there for their entire short life. They have admirable family values but we still begrudge the little varmints.

Vole populations tend to explode, peak and crash every three to five years or so. Their populations in urban and backyard areas are much smaller than those in orchards, pastures, and meadows. Voles do use mole tunnels and therefore place the blame for missing bulbs and chewed roots on moles. Moles are closely related to shrews and they dine specifically on grubs and soil insects. Moles don’t intentionally harm plants although their tunnels may dislodge roots and cause those plants to dry out more quickly. Visible signs of mole activity include raised tunnels that you can actually see and tamp back down with your foot. Visible signs of vole activity include quarter size holes and a spongy feeling when stepping in specific areas of suspected vole activity. Reduction in natural vole habitat also reduces habitat for the their natural predators. In our area many native creatures including fox, bobcat, weasels, pine and black snakes (both nonpoisonous), owls, hawks, and kestrels prey on voles. These predators depend on rodents as a food source and possess sensory abilities for locating their meals. Predators alone do not control vole populations but do contribute to the cause especially when they have their own young to feed. In an article written by author and Professor Andrew Derrington we learn:

“It turns out that the kestrel uses ultra-violet light to find his lunch. In this case it is the humble vole, which has the misfortune to be incontinent, leaving a trail of urine behind it as it goes about its daily business. The poor vole’s urine contains chemicals that reflect ultra violet light, enabling the kestrel not only to track down individual voles, but also to tell at a glance whether there are many voles in the neighborhood.”

The extent of plant loss or damage in relationship to vole populations should be considered when choosing which way to approach the problem. Safe and non-toxic methods like exclusion (installation of underground physical barriers) have proven to be effective because voles aren’t fond of getting cut or injured.

Exclusion methods generally do not involve chemicals and are safe to use in the presence of humans, pets, and wildlife. Coarse particles like expanded slate have proven to be effective barriers. Hardware cloth (less than a ¼ inch mesh) can be used also but may eventually restrict root growth.

When food sources and protection from predators are reduced, vole breeding and population decreases.

If you take the time to evaluate the problem and research your options you are more likely to save not only your plants, but also your sanity, and even some money. Whatever approach you take to protect your plants from voles or any pest remember that every action has a reaction and try to see the big picture including any long-term effects from the measures taken. We work hard to create and maintain the landscapes that surround us. We invest so much in it because we enjoy it. Voles can turn it into a war zone. (I am visualizing Bill Murray in Caddy Shack). Don’t let those little varmints spoil your gardening pleasures. The more you know about your so-called enemy the more successful you will be. There are methods for protecting our plants that are safe and effective. I wonder if the person who said, “an ounce of prevention is worth a pound of cure” was a gardener?

For information on an easy to use, permanent, safe, non-toxic vole barrier that also enhances root growth: PermaTill

Volebloc is available at The Garden Hut.

Thanks to Debbie “Permatill” Stringer for sharing this information with us.

The perfect gift! We can mail your gift certificate for you.